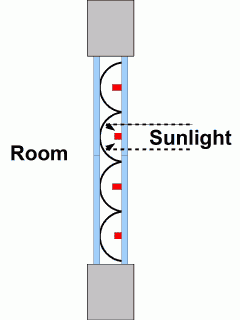 Had a query asking when the Sliver solar cells would be available. Assuming the money for research and development is available it will be years before you can buy a Sliver solar panel.

The major cost with solar panels is the silicon used for the solar cells. The Sliver design minimizes this by using thin slices ("slivers") of silicon. But perhaps this could be reduced further. I suggested building the cells into glass window panels of Shanghai offices and apartment blocks.

One way to reduce the amount of silicon used is to use a reflector to concentrate more sunlight onto the cell. This can be done with a trough concentrator above a long strip of cells Normally the trough is about a metre wide and several metres long and is mechanically steered to keep it facing the sun.

But the sliver cells are made in long thin strips. So they could be individually mounted above miniature trough concentrators each a few mm wide. Making thousands of tiny reflectors for one solar panel would seem like hard work. But they could be made all at once from a sheet of aluminized mylar plastic pressed to the shape. This would look like a shiny silver chocolate box liner (with indentations molded in for each chocolate). Mylar is already used in some solar panels.

The mylar sheet would be sandwiched between two sheets of glass provide a multiple functions:

Posted by Tom Worthington at 9:10 AM