That Other Eye in the Sky 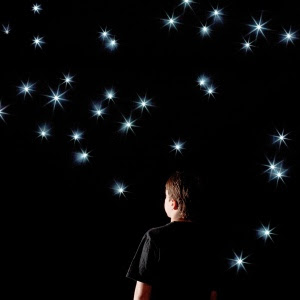 "That Eye, The Sky" is not a movie starring Helen Mirren, it is a play by Richard Roxburgh and Justin Monjo, adapted from the book of the same name by Tim Winton. I went along to last night's performance at the New Theatre in Sydney, not really knowing what to expect. I came out a few hours later not understanding what I had seen.

The play is set in Western Australia, around the current day. Ort (played by Joel Horwood) is a bit "slow" according to family and friends. He has more than the usual difficulties of being a teenager, with an ex-hippy mother, a father and grandmother in wheelchairs, plus an annoying older sister and a hobo preacher hanging around. Ort is obsessed with a glowing cloud hovering over his house, which only he (and the audience) can see: is this god? My Big Fat Greek Wedding 2 this is not, but it is a story about the obligations of  family.

Set Designer, Tom Bannerman, has produced a sparse set with a glowing and, at times, pulsating "cloud" hovering overhead. At times I had to cover my eyes as the pulsating light was too bright. Even when not pulsating, the "cloud" dominating proceedings and tended to distract from the actors.

If you are a Tim Winton fan, then this play might be for you. The cast make a fine job of the material, but it is very hard work for the audience.

ps: The Australian National University (ANU) was criticized in the Canberra Times newspaper, over plans to demolish its theatre spaces to re-develop part of the campus. The new development is not planned to have a dedicated drama theater, but will have multi-purpose spaces which could be used. Perhaps this new venue could be named the "ANU Roxburgh Center for the Performing Arts", as Richard Roxburgh is a graduate of ANU.

Posted by Tom Worthington at 3:35 PM