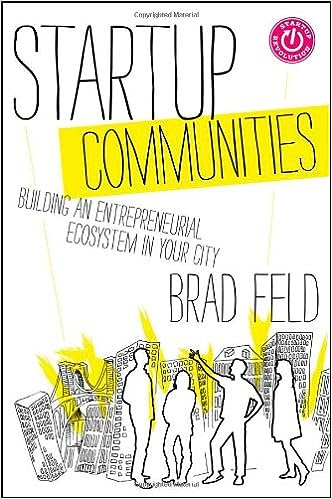 Apparently I asked one of the libraries I am a member of to get the book "Startup Communities: Building an Entrepreneurial Ecosystem in Your City by Brad Feld (2012). I don't recall asking for it, or where I heard about the book. It must have been months ago, when I was writing a course on Innovation for Canberra university students, particularly those participating in the Canberra Innovation Network. The book has just arrived, too late to use in the course, but is none the less useful.

As the name suggests, the book is for those building, a local startup community. As in Canberra, this can involve entrepreneurs (and those wanting to be), governments, universities, investors (be they angels or otherwise), mentors and service providers (in a gold rush those who provide shovels do well).

The book is 224 pages and based on the author's experience in Boulder USA, referred to as the "Boulder Thesis". Unfortunately the book is very USA-centric. As an example it is not explained until the second chapter what "Boulder" is (a city of 100,000 people in the state of Colorado, USA). The author suggests Boulder may have the highest  density of entrepreneurs per head of adult population of any city in the world. However, I suspect that some small university cities may have higher entrepreneurial density. As an example, Cambridge (UK) has a population of about 130,000 and significant start-up activity.

In Chapter two the author takes us through Boulder's pre-Internet start-up era, the Internet bubble and its intimidate aftermath. In Chapter three we learn some theory of what makes for a vibrant startup community and then it is straight into the "Boulder Thesis":

From:  Startup Communities: Building an Entrepreneurial Ecosystem in Your City, Brad Feld, 2012, Chapter 3.

This would seem to be a useful guide for any community: it should be lead by people from the community, by people with a long term commitment and be inclusive. However, I suggest it is unrealistic to expect everyone to commit to a twenty year plan. There has to be scope for people who have a year or two, a week or two, or an hour or two. If only those with total, long dedication are included, then most people and particularly those with family and other commitments, will be excluded.

In Chapter four Feld argues that the leaders in a start-up community must be the entrepreneurs, but "The best startup communities are loosely organized and consist of broad, evolving networks of people." He is skeptical of the value of government officials who are officially supposed to help with start-ups, such as economic development directors. He sees government programs as well intentioned but not long term enough to be of real value, with staff who do not understand entrepreneurship.

Feld sees government as not being good at investing in entrepreneurial activity. In general I would agree with this. One exception is the ACT Government's investment in the Canberra Innovation Network (CBRIN). The government provided office space and funding for some training and start-up competitions. CBRIN's office and its activities have the low cost, start-up feel to them, not like a glossy government development department. As well as inculcating people from the private sector and the universities with the entrepreneurial spirit, CBRIN also changed with teaching retiring public servants how to move to the private sector. This has the subtle effect of spreading the entrepreneurial approach throughout the public sector.

Also in Chapter four Feld expresses skepticism over the idea that startups need to be near a major university. However, he does agree that human capital (students and university academics) are useful, particularly students. This would agree with the main thesis of the "Cambridge Phenomenon", that the students and staff were important to the development of start-ups around the University of Cambridge (UK).

Feld is less impressed with the usefulness of research facilities at universities or of the formal transfer of licensed research results for commercialization. When I visited the University of Cambridge om years ago to discuss that issue, I found an interesting form of creative ambiguity: no one seemed to agree as to who owned the IP from research. Rather than be a negative, this seemed to provide flexibility for start-ups.

Feld also seems ambivalent as to the role of venture capital investors, seeing them as essential, but often at cross purposes with the entrepreneurs. He is more positive about mentors, almost idealizing them. It has taken me years to be comfortable is the role of mentor to student start-up projects. I was never sure how firm I should be in what advice I gave the students. When I noticed that my students were winning start-up competitions, I stopped worrying so much and assumed I must be doing something right.

A group which Feld mentions only briefly are the service providers, who provide legal, accounting, marketing and staffing advice to start-ups. In events at CBRIN I have met quite a few people from these companies. They seem ready to provide some free advice, in the hope of getting paid work later.

Surprisingly Feld spends more time on the role of large companies, such as Google and Microsoft in helping start-ups. Google has an R&D office in Sydney and comes to Canberra a couple of times a year to recruit university graduates. Many of these people end up in Sydney. Google hosts IT related meetings in its Sydney office (such as the Sydney Linux User Group, lovingly known as SLUG).

The most fun part of Feld's book and the fun part of start-ups is chapter seven on "Activities and Events". He discusses the Young Entrepreneurs' Organization (now known as the Entrepreneurs' Organization) and the Boulder Denver New Tech Meetup,  Boulder Open coffee Club, Boulder Startup-weekend, CU New Venture Challenge, Boulder Startup Week, Entrepreneurs Foundation of Colorado (EFCO). The point here seemed to be about getting people together in person.

Curiously what is lacking from Feld's analysis, given that many start-ups are about the Internet, is the use of the Internet for collaboration. While I agree it does help for people to meet in person, at least once, many cannot spend time at face to face events. There seems to be a lack of discussion of on-line tools, as if this would undermine the start-up ethos.

One of the impediments to the entrepreneurial community is the jargon. For example, what is an "accelerators"? For startups, this is a short term program designed to provide the venture with advice, training. In chapter eight Feld gives the example of the Techstars accelerator program. He contrasts these accelerators with "Incubators" being set up to help businesses at any time, whereas an "accelerator" is a fixed term program the start-up is run through. There may be accelerators and incubators associated with each other, for example the KILN Incubator and the GRIFFIN Accelerator  are both run out of the Canberra Innovation Network office. As Feld pints out there can also be accelerators run out of universities, although I have seen one example where the accelerator office were very neat and tidy, not nothing seemed to be happening there.


In chapter 9 Feld addresses the role of universities, starting with something called the "Silicon Flatirons Center" at the University of Colorado Law School. The significance of "Flatiron" was lost on me, but this seems to be a center for technology policy research. The problems with limiting examples to Boulder is most apparent in this chapter of Feld's book. The University of Colorado Boulder no doubt shares problems of engagement with entrepreneurial engagement, limited entrepreneurial programs and siloing of programs with other institutions. But there are universities elsewhere in the world which have overcome these problems. Feld's solution is the students. In Canberra this is shown by the enthusiasm with which they have taken up the Innovation ACT program, where students (and other) can form teams and compete to produce a business plan for a startup and ANU TechLauncher, where students undertake a project course to produce a product or service (with the help of alumni as mentors).

The point at which I started to disagree with Feld was chapter ten "The Difference Between Entrepreneurs and Government". He says "Great entrepreneurs are intensely self-aware... Entrepreneurs fail often and own it; government leaders rationalize why something didn’t go their way." However, this criticism of government could be applied to an established organization, public or private. No one running an organization is going to want to admit they do not know what they are doing or have made a mistake. It is very easy for an Entrepreneur who has no customers to say something went wrong, it is much harder for someone running a service lived depend on.

Feld says "Entrepreneurs work bottom up and government works top down". As he says Government has hierarchy, infrastructure, staff and rules. However, there is innovation in the public sector and it does happen bottom up. This innovation usually happens despite the organization structure and rules, not because of it. As an example in the mid 1990s a group of public servants set out to introduce the Internet to the Australian Government. This was not done as a result of any central mandate, quite the opposite (it was done in contravention of central mandate). Part of the process was to change the minds of the senior management and lastly to allow the political level to take credit, retrospectively.  That might sound subversive, but it is how change happens in government and large private sector organizations. This is not usually acknowledged but is not secret. As an example I gave a talk about it in Canberra in 1995: "Internet in Government" and this was reported in the media as  "The cabal that connected Canberra" (1995) and detailed in Peter Chen's 2000 ANU PHD thesis. An interesting experiment is currently being conducted by the Australian Government, with the creation of the Digital Transformation Office. The DTO aims to create "Simpler, clearer, faster public services". The immense challenge is to do this while keeping government reliable and equitable. DTO might benefit from running internal entrepreneur programs and training, or joining in those provided for  students and the public.

Working in and around bureaucracies is an area which is perhaps neglected in the education of entrepreneurs. Many revolutionary business ideas depend on having laws changed. An example are share applications such as Uber and AirBnB, where individuals provide a service to others. Building an IT system to make this possible is the easy part, the difficulties come in getting around the many of laws covering the existing commercial providers of such services. Entrepreneurs might be able to learn from the way public servants effect change.

Feld, B. (2012). Startup communities: Building an entrepreneurial ecosystem in your city. John Wiley & Sons.
Posted by Tom Worthington at 12:07 PM