Hacked for Humanity in Sydney This Weekend

Greeting from the Commonwealth Bank headquarters at Darling Harbor in Sydney, where Random Hacks of Kindness Sydney (RHoK) has been holding their RHoK November Hackathon. Four teams have been working on four projects with a social purpose. This afternoon presented their results. In order of presentation:

First Stop are building a system for registering survivors after a disaster, so they do not need providing the same details to every agency. This is intended to not add to an already stressful situation and allow more time for helping the survivors. Already First Stop had a barcode printing application using vcard, from a previous RHOK (used for participants at this RHoK). This weekend the team added the capability of adding extra data fields to suit different agencies.


OCIUS: Are providing a website for analysis of data from a   BlueBottle USV 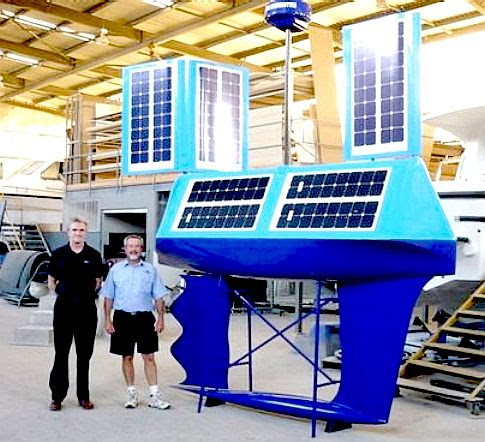 . This is a uncrewed solar and wind powered vessel which collects oceanographic data. The problem is explaining to potential users and the general public what the USV can provide and how it can be used. The team looked at needs of the media, environmental groups and researchers. The aim is to demonstrate the system sailing autonomously around Lord Howe Island, transmitting data via SkyWave . I suggested activities for children be built into the website, such as where they carry out calculations from the data and identify and count animals seen by the on-board camera. This reminds me of the Australian developed Aerosonde Robotic Aircraft. which was the first to cross the North Atlantic Ocean (3,200 kilometres in 26 hours). While the system is intended for environmental monitoring, it also has obvious military applications. The Australian shipbuilding industry could do with a boost, having come in for criticism from the Minister for Defence, who said he did not trust the government owned shipbuilder"build a canoe".

First Robotics: This is an Australian offshoot of the US First STEM Project, to interest children in science, technology, engineering and mathematics (STEM). First Robotics provide activities for Australian school children using robots (including Lego robot kits). The RHoK exercise this weekend was to look at how to market the activities to parents and teachers. The team produced style guides, wire-frames and surveys for the website.


Benjam: Is a project for the " Woodbury Autism Education and Research" to build an App which al lows children with autism to communicate with their carers. This would use off-the-shelf networked mobile devices and have a user expandable vocabulary. An example given was a new type of biscuit . The team presented a series of use case diagrams, showing the user journey. The concept is that the device would respond to gestures , such as nodding and pointing. While there has been considerable Human Computer Interface (HCI) research on gesture interfaces and some real products (mostly games) these are too compl ex for this use. Suc h an interface might be of use for adults where their attention is limited, such as when driving . Also Australia has an Autism Cooperative Research Centre, which may find this project of interest.

I was one of the three judges and we were unanimous in awarding Benjam a trophy , but all the projects were good.

The Commonwealth Bank building  in Sydney provided an excellent venue. RHoK u sed a meeting room with a n outdoor area with views o ver Darling Harbor . The building has an atrium letting light down into all levels of the building and an open plan layou t, with no walls at all onto the atrium.